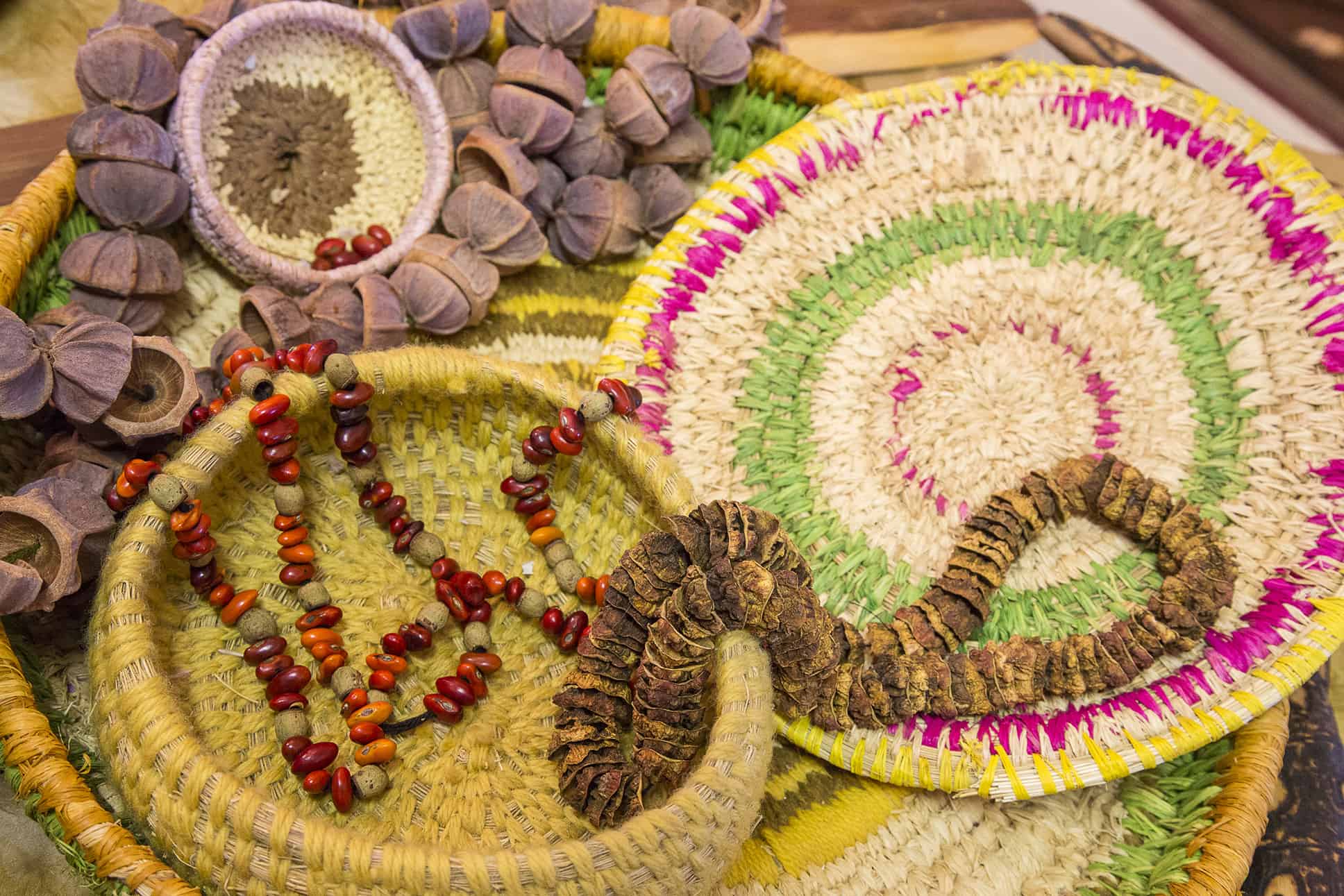 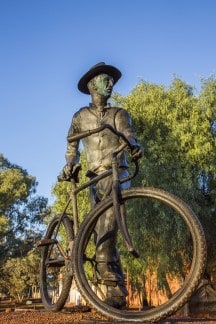 Laverton was first known as ‘British Flag’ but its gazetted name honours Dr Charles Laver, an intrepid medico and adventurer who embraced the region’s prospects as a goldmining centre way back in 1896.

Laver was quite a remarkable fellow and was a legend in his own lifetime, much loved for his ‘unselfish devotion to his goldfields patients’ and known as ‘Mr Doctor’ by the many Aboriginal people he treated.

The history of the region’s Aboriginal people extends many millennia back in time. The landscape is a tapestry of sites of ancient (and enduring) spiritual significance to its traditional custodians. The first Europeans to traverse the region were explorers, followed by a few intrepid sandalwood pullers, then by hundreds of prospectors in the mid-to-late 1890s. Gold mines were established and a plethora of small but vibrant towns sprang up within a tight radius of Laverton, including Euro, Beria, Burtville and Duketon. Slightly further afield Mt Margaret and Mt Morgans flourished. Laverton survived, the others did not. 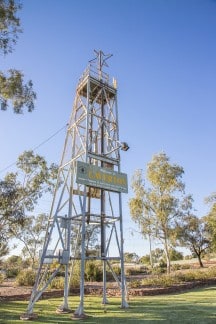 Laverton’s first century was punctuated by euphoric highs and depressing lows. By the 1960s, gold was fetching little more than $60 an ounce and mining was virtually at a standstill. Many feared the town was about to die. But along came Ken Shirley, a freelance prospector working for Poseidon NL, who discovered rich deposits of nickel in 1969 at nearby Mt Windarra. His find catapulted Laverton to world prominence, thanks to the sensational stock market boom in Poseidon NL shares. Ultimately, it was Western Mining Corporation that developed the Windarra Nickel Project, mining and processing for over twenty years and extending to Laverton a much-needed lifeline. The population quadrupled, with Western Mining investing heavily in housing and services for its Windarra employees.

In 1994, Western Mining closed Windarra down. Yet again Laverton was under threat. Today, however, Laverton’s fortunes have risen with a revival of gold mining due to the ever-escalating gold price. Mines such as Granny Smith and Sunrise Dam are to the south of town while, to the west, the massive Murrin Murrin nickel and cobalt operation has settled into steady production.

The Great Beyond Explorer’s Hall of Fame and Visitor Centre

1 / 8
prev next
Dr Laver Statue, Laver Place, Laverton
Laverton Outback Gallery interior
The Great Beyond Laverton, Augusta Street, Laverton
Celebrates the many explorers that traversed the Laverton region from the mid-19th to early 20th century. This state of the art centre includes interactive displays, a café, gift shop and the Laverton Visitor Centre.
Police Complex, Erlistoun Street, Laverton
Consists of a number of buildings which include the Gaol, Police Station and former Sergeant’s quarters. This historic precinct represents an early 20th century way of policing and living. The precinct has a close association with the development of the law and law enforcement in Western Australia.
Historic railway tank, Beria Road, Laverton
Windarra Lookout, Laverton
Art and craft on display was made by the local Wongi people from the lands of the North Eastern Goldfields extending into the Western Desert region. The artists have connections to the land and share their stories through the making of their product.
Many of the old mining camps and town sites in Laverton area are now ghost towns and the cemetery is usually the only remaining landmark. These include Mt Morgans’, Mt Margaret, Cox’s Find, Red Flag and Eagles Nest. 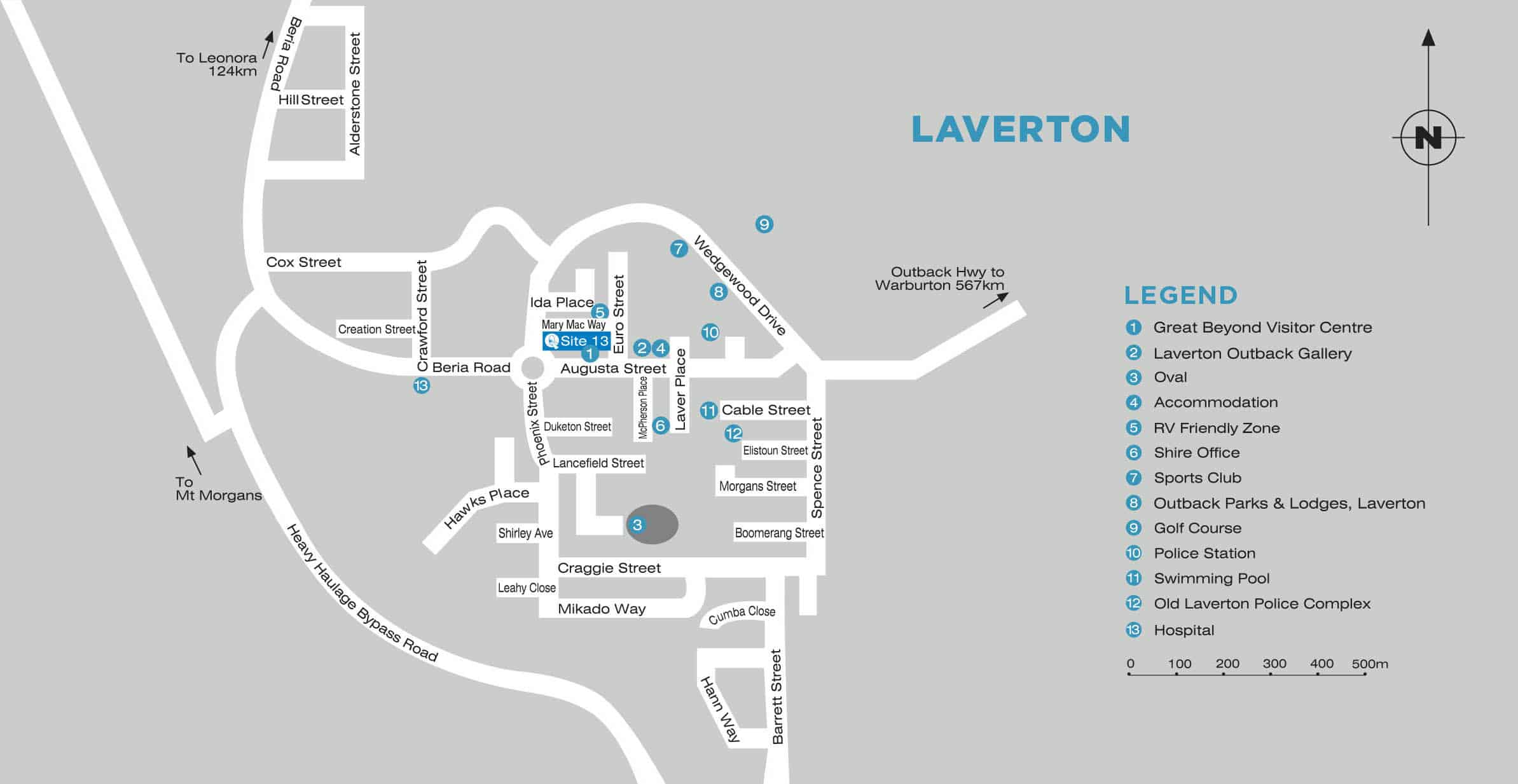 The Great Beyond Explorer’s Hall of Fame and Visitor Centre