A History of ‘The Round’ 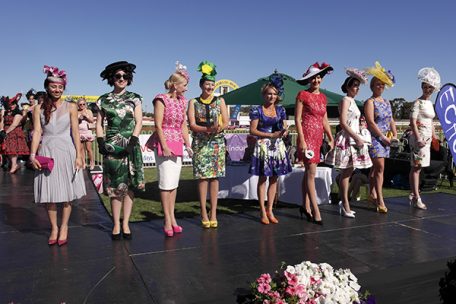 Entrants in the Fashions on the Field competition

It is without doubt one of the biggest, most colourful and successful racing carnivals to be staged anywhere in Australia. It is steeped in history, been the scene of some of the most incredible events both on and off the track and for many it has etched memories which have lasted a lifetime.   But its much more than just a racing carnival. It is a social pilgrimage where friendships are made, bonded and often re kindled from people from all walks of life.

It is a carnival in the true sense of the word It is the annual Kalgoorlie-Boulder Race Round.    A document written at the turn of the century revealed the important role racing and its social aspect meant to those who blazed the rugged Goldfields trail.    The struggles of the pioneers against drought, fever and all the ills that attend the men who ‘blaze’ the track could not kill their sporting instinct and even back in the days when their weekly bath was measured in a pannikin and fever was claiming its scores of victims every week, racing thankfully took place periodically.”

The Kalgoorlie-Boulder Racing Club is one of the oldest registered racing associations in Western Australia having been formed in 1896.

To purchase tickets to the 2017 Kalgoorlie Race Round, please visit the Kalgoorlie Boulder Racing Club Website.